Did you know that LoginTC has a chrome extension?! This feature came out in 2015 and was the world’s first non-OTP two factor authentication chrome app! This feature is a breakthrough in the cybersecurity industry and was truly ahead of its time when it was released and yes, you guessed it, it works on Chrome for both desktops and laptops.

LoginTC Chrome is a simple to use, cost effective application that enhances the user experience. It allows end-users to benefit from 2FA while using LoginTC without any friction. A notable accomplishment is that LoginTC never uses any supplementary hardware but instead leverages existing infrastructure. The Chrome app allows users to swap between mobile and PC’s without having to compromise their 2FA system. 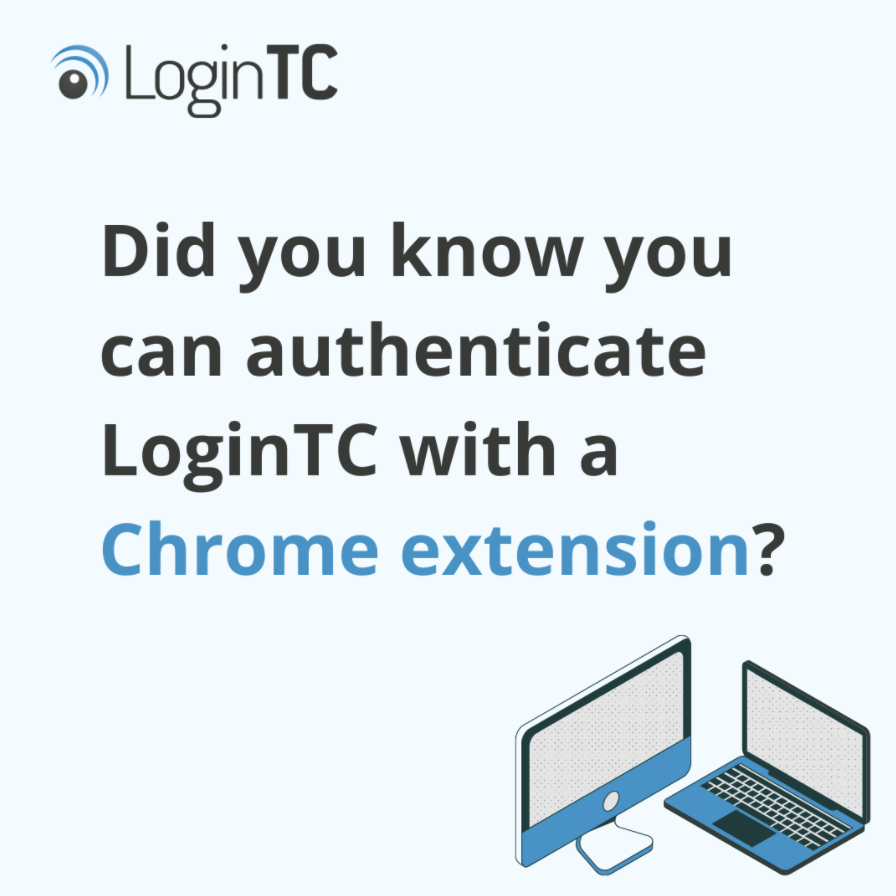 Diverse businesses are composed of diverse users who have a variety of habits, preferences and behaviour patterns, but everyone deserves two-factor protection. This release empowers any end-user at any organization to benefit from 2FA and from the LoginTC advantage without friction. All you need is a computer and LoginTC to rest assured that you’re secure.Administrator-provisioned users simply “add” the LoginTC app to their Google accounts through the Chrome Web Store. When a user logs in to a LoginTC-protected asset (e.g. VPN) with his/her first factor credentials (username and password), a second-factor access request is sent to the corresponding desktop or laptop via Google Cloud Messaging. Users Deny or Approve with the click of a mouse!

“The LoginTC Chrome extension works just like the LoginTC iOS and Android applications (including push notification authentication) and is available for all operating systems that run desktop Chrome (including Windows, macOS, and Linux). It’s perfect for users who prefer to perform push notification authentication directly on their desktop.” said CTO Thomas Sydorowski.

The LoginTC Chrome feature has many advantages to it. The LoginTC Chrome feature has many advantaged to it.One advantage is that it works with all PC platforms that run Google Chrome: Windows, OS X and Linux. It even has a new end-to-end diagnostic testing from the app itself to ensure LoginTC is fully functioning, which empowers end-users to work alongside administrators toward the common goal of maximum security. End users (e.g. employees) that do not use a smartphone for work purposes can now get the same LoginTC-grade 2-factor protection on their desktop computer or laptop. This also applies to businesses that do not issue mobile devices to employees. Makes 2FA-enabled BYOD (bring your own device) more accessible to all prospective users, and therefore streamlines implementation. The chrome extension empowers end-users to choose between mobile or PC, which increases probability of proper and consistent user adoption thereby increasing overall security while minimizing training and administrative headaches. It also eliminates the need for a second independent device, as LoginTC creates a 1:1 link between its services and one specific computer per user, turning the paired PC into a strong second-factor credential. The result, when using a computer to log in to a LoginTC-protected account, is an elegant and safe single-screen sign on experience. There’s no unreliability, unsecure and geographically-limited SMS networks, no race against the clock to type in an OTP and no codes that could be copied onto other devices.

Want more information on the Chrome extension? Contact us at sales@cyphercor.com or give us a call at 1-613-592-5800.